Southampton manager Ralph Hasenhüttl says his side must be more organised than Chelsea to have a chance of winning at Stamford Bridge on Saturday.

Saints were impressive 2-0 victors in west London on Boxing Day last season, but the Blues have since revamped their squad as the Premier League’s biggest spenders in the summer transfer window.

Among the new arrivals is German striker Timo Werner, signed by Hasenhüttl at former club RB Leipzig, where he scored 93 goals in four seasons, and the boss knows his players must be on their guard against such a star-studded attack.

“We see the signings and they are fantastic, but it is not surprising that other teams have more individual quality than we have or more expensive players, or higher wages,” Hasenhüttl said.

“When we look at it like this, we have no chance against a lot of teams in the Premier League, but the good thing is it’s not the best single players winning games, it’s the best teams winning games.

“We must be the better team and the better organised team – this is the only chance for us to win against such teams, and this is the goal for the weekend.

“The good thing is in one game anything is possible, and we go there to be as competitive as possible to take as many points as possible.”

Both teams are back in action after a two-week international break, in which Saints had eight first-team players in action for their countries and Chelsea even more, with some of Hasenhüttl’s squad not due to return to Staplewood until Friday.

“It would be better if we had a bit of time to work together before – this is definitely something that we are missing this week, but the opponent has the same problem,” he added.

“We don’t expect the best game from us at the moment, but they are also struggling with a lot of players going on international travels, so the team that finds quicker in the game and better in the game has a big chance to win it.”

All of the action from a frantic Premier League meeting at Stamford Bridge. 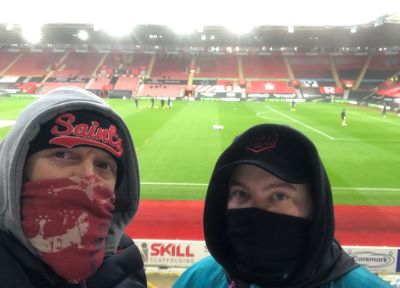 On the EFDN's Employability Action Day, we celebrate Lewis and his achievements on our Saints Works programme.