Southampton Under-23s’ match with Everton will be one of their toughest of the Premier League 2 season, according to Technical Director Martin Hunter.

The top-of-the-table Toffees travel to Staplewood Campus tonight, and Hunter is well aware of the threat they will pose his side.

“In the past they have been a bit of a bogey side for us,” he explained.

“They are top of the league at the moment and have a team of good players that have all grown up playing together.

“Every time we’ve come up against them we’ve had a very tough encounter, both technically and in terms of their robustness on the pitch.

“So we know it’s going to be one of our toughest games of the season – we need to make sure that we are ready.”

Saints will be looking to bounce back from last weekend’s narrow 3-2 defeat to a Chelsea side with more than 240 international caps between them.

But, despite last weekend’s result, Hunter believes his players learned a lot from the match at Cobham.

“The younger players have learned from last week,” he continued.

“When you play against players of the calibre that Chelsea had on the pitch, it’s very good for your development and decision making.

“A lot of the younger players have been given the opportunity this season and virtually, to a man, they have all taken that.

“Now we need to see that continued work ethic and application here on Monday night against Everton.”

Barnes: Everton will be hungry for a win 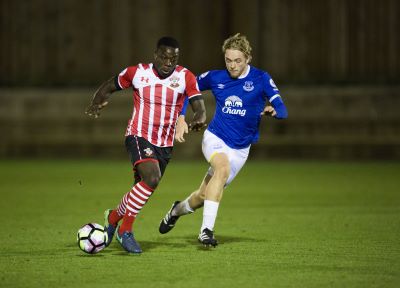